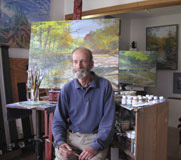 Gebhart grew up in the Pacific Northwest, in an artistic and creative family who filled his young years with experiences of art and music. In 1967, he came to the Cleveland Institute of Music to study harp, but a part time job at the Cleveland Museum of Natural History opened his eyes to the natural world and led to a career of exhibit design and illustration.

“The habitat of the Great Lakes enticed my first sailing trip on Lake Erie with the assistant director of the Cleveland Aquarium. Since then, I’ve owned more boats than cars, or harps and I could fill a small dump with paint brushes, pencils, erasers and other artistic artifacts of plein air painting.”

Gebhart sailed to the Dominican Republic in 1980 where he built a small museum. In Arizona he built and opened a painting studio while also crisscrossing the country to work on other projects. By 2008, he had settled into a farmhouse in Windsor, Oh, and opened a studio where he has been painting scenes from around Ashtabula County, among his many other projects which include working on historic exhibit panels for the Windsor Historical Society.

Brant has been plying the waters of Georgian Bay and the North Channel of Lake Huron since 1998. I am a retired museum exhibit designer and illustrator for natural history museums by trade and live in my sailboat in the summers to sketch and paint outdoors. These landscapes are “plein air” paintings that took about three hours to complete in one sitting. I held the canvas, taped to a board, on my lap and painted with Liquitex acrylics because of their archival stability, quick drying time, and low toxicity. Acrylics also don’t attract insects…and what a sitting duck I have been for those critters!

The pristine beauty of these natural freshwater settings have become intoxicating to many vacationers, yachtsmen, and cottagers. This was also the heartland for the early French fur trading industry in the eighteenth and nineteen century together with intense lumbering activity. It should be noted here that Georgian Bay and North Channel are unique and fragile wetland areas that are presently being studied by the Georgian Bay Association Foundation’s ecological team.

In the winter months I fill orders and work on my studio paintings. These are large canvases using imagery from the Bay and other localities, painted in a surrealistic way to convey my emotional attachment to the natural environment.